On Sunday evening, Gayathri mesmerized the gathered group of audience with the best of carnatic music with her majestic voice. The audience were treated to a variety of songs starting with Sarasijanabha Mampahi varnam in Naattai. Following that she sang, Naradhamuni vedalina in ragam Pantuvarali. "Ma Ramanan" was preceded by raga alapana in Hindolam.

Gayathri took for the centrepiece, Shankarabaranam (king of carnatic ragas) and rendered the song “Saroja Dalanetri” in grandeur.

A voice to 'pine' for - an extract from Wellington Hutt News 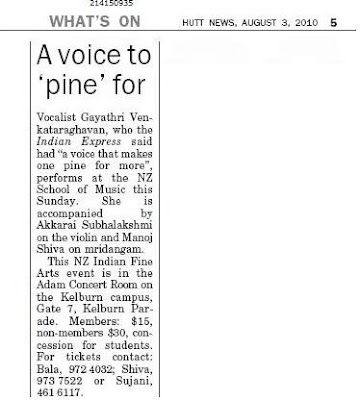